Recently, I got a prerelease foil of Happily Ever After. It’s not the best card, but it says “you win the game” on it, and it’s shiny and foil. The question is, which deck am I going to use it in? It took a bit of an epiphany to find the correct deck. 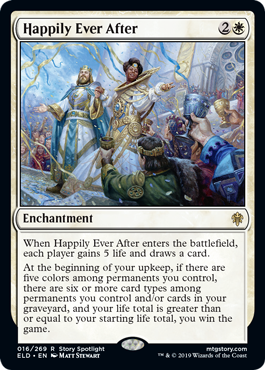 The first thing the card does is giving everyone a card and some life. Technically, it’s card disadvantage, because aside from drawing, you also use up a card and everybody draws. People also get a bit of life, and hopefully, they’ll like you a bit more now. In a game where winning is zero-sum, “being liked” is a weird advantage, because you’re still the enemy, but, at least maybe the other players are more the enemy than you are. For now. Maybe the others now try to kill you last which is something. This is the group-hug theory, but beware, some people hate that, and try to attack you first. Having a card in play that reads “you win the game” probably doesn’t do you any favours either.

While it is unlikely to win with Happily Ever After, it’s fun to try. A couple of conditions need to be met, and it’s not easy.

– Your life total is equal, or greater than your starting life total. Since it’s likely everyones primairy strategy in the game is to try and lower your lifetotal, preferably to zero, this is a difficult condition to meet. The card graciously gives you 5 more life points to work with, but other means of upping and protecting your life total are in order to make sure it’s even possible, and to defend yourself when you threaten to win and become a target.

– There are six or more card types among permanents you control and/or in your graveyard. Happily Ever After is an enchantment. You probably cast it using mana from lands. And you likely have some creature around or in the graveyard. It’s handy that killing the creature doesn’t stop the effect, so that’s already 3 card types. Now all you need is an artifact, an instant and a sorcery, or a Planeswalker and you’re off to the races. In general, you’ll arive here naturally, and it’s probably the easiest condition to meet.

– There are five colours among permanents you control. It’s tricky, and it nudged me towards one of the commanders. But then it hit me: I’ll use this one instead: 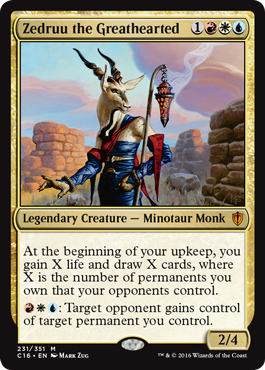 Zedruu only has 3 of the 5 colours needed, and since there are restrictions in Commander based on the colour identity of the commander, I’ll have a hard time actually casting something black, green, or black-green. Hard, but not impossible. Living Weapon cards like Batterskull make a black Germ token. Curse of the Swine can turn something into a green Boar. Transguild Courier just is all colours. But do I really need to dilute the deck just to make an obscure wincondition work? Then I realized something about how my Zedruu deck functions. Trading!

The main thing the deck does is giving stuff away to gain cards and life (handy for the 40 life or more condition.) – But, it also has many control effects and effects that exchange control. It than hit me that I don’t actually need to run black, green or black-green things, as long as I have an opponent that does. Worst case scenario, and I’ll just give away Happily Ever After to some player that can’t trigger it, or to make someone a target. 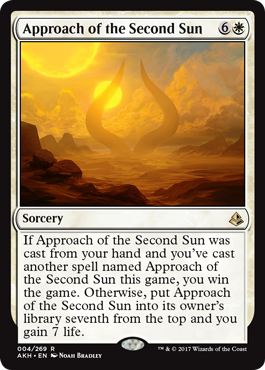 So, that’s another card I can use to create a bloodless victory, and it feels more friendly than Approach of the Second Sun. It also works well, because Approach gives an additional life buffer. I just hope that other players accept that I’m playing a slightly different game with the alternate win conditions, but at least it’ll be different with a distinct play style, and generally focusing on enabling other decks, and creating a narrative. I mean, you won’t actually lose when you all get to live happily ever after.