I’m still looking at tweaks for the Let’s Build a DOOMSDAY MACHINE deck. I found another card that might be interesting and could do many things in this deck. It seems like a powerful card, offering both the ability to create “scrap” – random artifact tokens I can sacrifice to other effects in the deck –  or it helps with card selection and with getting artifacts into the graveyard, so I can use Goblin Welder effects to get them out on the table. 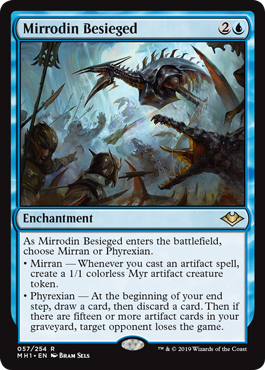 But that’s not all. Should I ever get 15 artifacts in the grave -and it’s not that hard for this deck- I can start eliminating opponents, one per turn. And that is a bit of a pickle for this deck, as it looks for more contrived ways to do that, building intricate machines. Is it worth it to run one card that kicks a player out of the game that really deserves it, like the one hiding behind a huge pillowfort, or some stax player, or combo player? Or does it betray the goal and flavour of the deck?

Also, since I tried to find a spot for Saheeli, Sublime Artificer, but couldn’t find a spot, even though she has a similar function to the Mirran side by making tokens, it seems hard to find actual space for Mirrodin Besieged. At least Saheeli is somewhat flavour appropriate.