With Dragons of Tarkir a lot of interesting dragons came out, and many replaced cards in my old Karrthus deck. Surprisingly, one of the new dragons I’m most exited about is a lowly uncommon. So, below is my old Karrthus deck. It has seen some changes, but the new influx of dragons does seem more of an overhaul rather than subtle tweaks:

There have been changes after trying out this deck. More dragons where added, as well as some extra lands. Some tricks where nice in theory, but didn’t work out in practice, so more emphasis is put on individual dragons. The Changelings where replaced by actual dragons. Not that they where bad, but tricks involving these and Zirilan of the Claw didn’t came up often enough to warrent inclusion. Zirilan stayed, but now playes a slightly different role.

The additions of Fate Reforged and Dragons of Tarkir also lowered the curve a bit. Dragon Tyrant is cool, but ten mana is a bit much. Atarka, World Render is both cheaper, easier to sustain and gives the double strike bonus to others as well. With more legendary dragons at my disposal, Kiki Jiki also got sidelined. 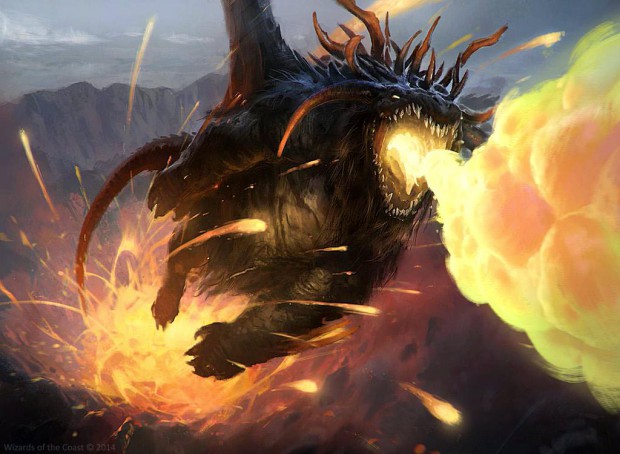 The best new addition is probably Savage Ventmaw.  It does what the deck wants -playing dragons- and gives what the deck needs: Lots and lots of mana. When given haste it’s practically free and is a huge jump in mana, making even the higher cost dragons available far sooner. But it doesn’t really end there. 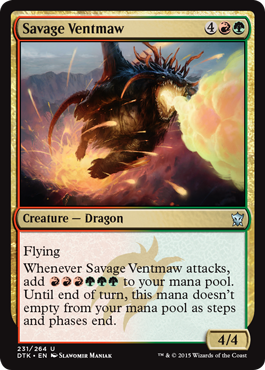 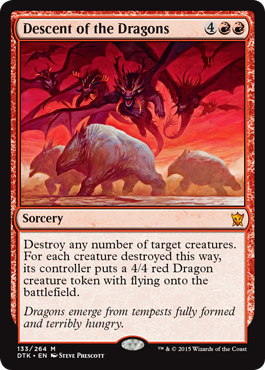 It also makes it far easier to take advantage of Karrthus and the ability to steal dragons. It’s not inconcievable to curve into Death By Dragons and follow up with Karrthus on the same turn. Or do the same, but with Descent of the Dragons.  Making dragon tokens and immidiately stealing them with Karrthus makes the effect a lot harder to play around. Before, when I used Death By Dragons, opponents just smashed their new dragons against each other, so they rarely lived long enough to come to my side.

But the Ventmaw interactions can get even better. Before I used cards like Bear Umbra and Nature’s Will to untap lands and use that to power out infinite combat phases with Aggravated Assault or Hellkite Charger. Ventmaw doesn’t need much help doing that by himself, going infinite with the Assault and large with the Charger. The first will even generate mana, while the latter now costs an extra 1 per activation; A small price to pay for extra combat phases I would say.

There are more changes coming out of the new set. A commander deck is never really finished, but the low hanging fruit is easy to see. For example, Rorix Bladewing is an okay hasty dragon, but can be a little awkward sometimes, because of the trippel red, which has consequences when using ramp to find Mountains instead of spreading out over all the Jund colours. So, he is replaced by Dragonlord Kolaghan, who has similar stats, but also gives haste to all other creatures. Sure, there are other sources of haste in the deck, most notably Karrthus himself, but you’ll want to be able to attack with your dragons as often as possible, so redundancy is welcome. 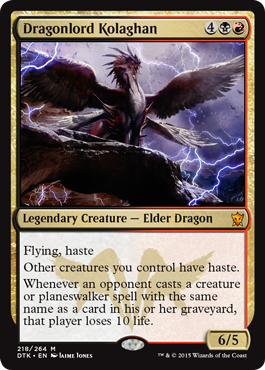 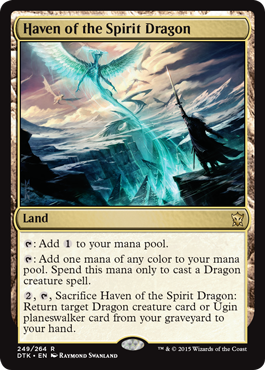 It’s easy to overlook Kolaghan though, because his last ability does very little in commander, except hose a random Relentless Rats or Shadowborn Apostle deck. But still, solid hasty stats regardless.

Haven of the Spirit Dragon is as good as almost any land in the deck. Sure, it doesn’t make Snow Mana, but the only card that wants that is Rimescale Dragon, and there is still plenty to go around. It’s miles better than Crucible of the Spirit Dragon, a land I added when Fate Regorged came out. In fact, it’s in many ways the opposite of that card. The Haven is a manafixer that comes on the battlefield untapped and is better than most lands in the deck in that regard. In fact, the closest to Haven is Cavern of Souls, which fills a similar role of mana fixing and protection.

There still needs to be a lot of dragons collected and evaluated, and deck space is limited, such as the Regent cycle. I’m willing to try out Foe-Razer Regent, since he doubles as a nice effect for Zirilan, as well as interacting with the (sparse) Fight cards, like the Dragon mode on Frontier Siege or the -2 of Domri Rade.

Deathbringer Regent might be a worthy inclusion as well, but the ‘play from hand’ clause does limits it somewhat as a toolbox card. Thunderbreak Regent is utterly fantastic, though. Shooting lightningbolt to anyone who dares target a dragon is nice, but simply being a 4/4 for makes it a champion in the lower part of the dragon curve.